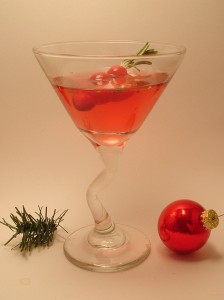 The Cosmopolitan originated in the 1970s in either Provincetown, MA, Minneapolis, or San Fancisco, depending on who you are talking to at the time. But no one can argue that its popularity really exploded during the glory days of ‘Sex & the City’. This holiday version of the ‘Cosmo’ adds the taste of rosemary to the equation. Add a few cranberries and this drink is ready to for any ‘sophistimacated’ Christmas celebration.

Preparation
Chop up a few sprigs of rosemary and add them to your vodka for a few days. Add the rosemary vodka, cointreau and cranberry juice to a cocktail shaker half-filled with ice. Shake a few times and then strain into a chilled cocktail glass. Spear a few cranberries with a rosemary sprig and then float it on top of the drink.