You are here: Home / Archives for apple cider 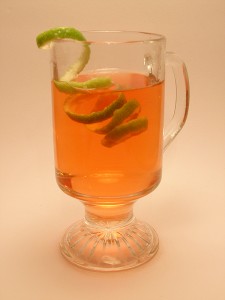 Our ‘Hot Cocktails of Winter’ Series continues with a warm treat from south of the border. Combining apple cider, cranberry juice, tequila and a hint of orange.

Preparation
Heat the cider and cranberry juice in a shallow saucepan. Remove from heat as steam begins to rise, do not boil. Add the tequila and triple sec. Pour into a warm mug and garnish with a twist of lime. 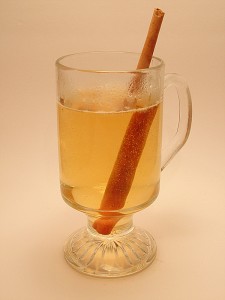 Today’s ‘Hot Cocktail of Winter’ is the Cinnamon Stick Cocktail. The aroma of cinnamon from this drink  fills up the senses but doesn’t overpower the flavor of the drink at all. The taste of cinnamon arrives as a warm, subtle aftertaste within the warm apple cider. The taste of the spiced rum arrives on the tongue shortly after the cinnamon has faded away a bit. This drink is a great way to warm up your entire body and fill your senses with cinnamon aroma after a cold winter stroll.

As I examined my cinnamon stick I wondered, “where the heck does cinnamon come from?”

Cinnamon comes from the inner bark of the cinnamon trees. The trees are cut back allowing small shoots to develop at the base of the stump. The outer bark is peeled from these branches allowing access to the inner layer. This layer is removed and as it dries it curls into the cinnamon stick shape that we are familiar with.

Fill a mug with hot water and sit aside for a minute. Heat up apple cider in a shallow sauce pan, remove from heat before it boils. Empty the mug and quickly dry the inside. Add the spiced rum and Goldschläger to the warmed mug, then pour in the hot cider. Garnish with a cinnamon stick. 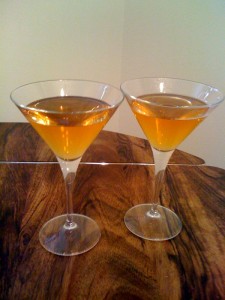