You are here: Home / Archives for dry vermouth 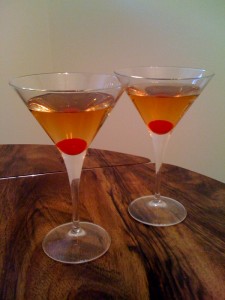 This week we decided it was time to find a rum based cocktail. We found this recipe for the El Presidente cocktail on the Bacardi Rum website.

While doing some research on the El Presidente we discovered several variations – some included pomegrante juice, pineapple juice or grenadine but since we were planning to use Bacardi Gold rum we figured we’d go with the Bacardi version of El President. It’s a simple cocktail with a gorgeous amber colour and just a hint of vanilla from the Bacardi Gold.

garnish with a cherry

If you use Bacardi white rum in place of the Gold and garnish with an olive instead of the cherry you’ll have a Bacardi Rum Martini according to the Bacardi site.  Bottoms up!

Many people feel this is only one true Martini – gin with just a whisper of vermouth garnished with an olive. We’re not going to debate whether other martini recipes are valid martinis or just pretty cocktails but we’re starting with the classic original martini.

Yesterday @randymatheson and I picked up some new martini glasses and a cocktail shaker at Kitchen Stuff Plus as well as some vermouth and gin. The gin is in the freezer for the day – a martini should be served ice cold – and we’ll post photos this evening when we make them.

According to Wikipedia:Over the years, the martini has become one of the most well-known mixed alcoholic beverages. H. L. Mencken once called the martini “the only American invention as perfect as the sonnet”,[and E. B. White called it “the elixir of quietude”. It is the drink of the one-time “three-martini lunch” of business executives, now largely abandoned due to company “fitness for duty” programs.

To make the classic original martini:

Add ice, gin and vermouth to cocktail shaker, shake then strain into a martini glass. Garnish with an olive.

Some martini aficionados feel that the 4 to 1 part ratio of gin to vermouth as above is not dry enough and prefer a 6 to 1 part ratio referring to it as a dry martini. Others insist that the vermouth be swirled around the glass then poured out before adding the ice cold gin.

We’ll be mixing the standard 4 to 1 ratio tonight as we prepare to watch the season premiere of Mad Men.