You are here: Home / Archives for ginger beer 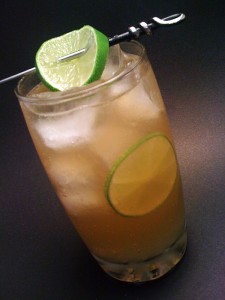 This drink started out as a Dark & Stormy until we realized we were out of dark rum. Not to worry, we found a bottle of our favourite spiced rum, Sailor Jerry and we soldiered on. Cheers! END_OF_DOCUMENT_TOKEN_TO_BE_REPLACED 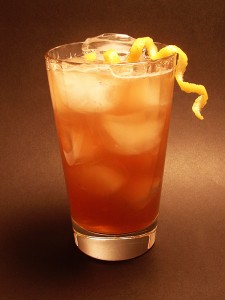 This week we couldn’t help but notice the the ad for Kraken Black Spiced Rum on the back cover of LCBO’s Trend Report magazine. The distinctive bottle, colour and label artwork really caught our eye, so when we saw it on the shelf tonight at the LCBO I knew we had to try it.

The description of the black spiced rum speaks of hints of chocolate and molasses cut with vanilla, cloves and undercurrents of cinnamon. That’s a lot of tastes to absorb – we definitely get the molasses, vanilla, cloves and cinnamon – not so much on the chocolate, but we’re willing to keep trying until we find it.

The feature was accompanied by a drink recipe for The Perfect Storm, a twist on the classic rum drink the Dark & Stormy. Here’s our slightly tweaked version.

Combine the ingredients in a cocktail glass with 3-4 ice cubes. Shake, then strain into a high ball glass filled with ice. Garnish with a twist of lemon. 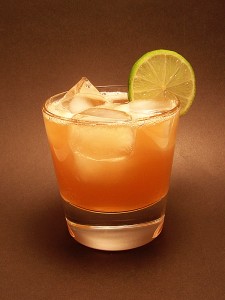 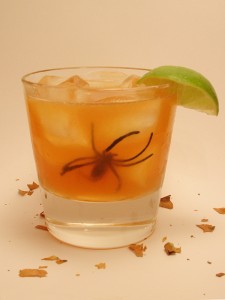 Everything always seems a little spookier on Halloween night. The sky is just a little darker, the wind blowing the leaves around makes you stop and turn, the eyes of the jack-o-lanterns are staring at you from every doorstep. 8 year-olds dressed like Snooki or Lady GaGa and hopped up on adrenalin and sugar run screaming past you, their bleary-eyed parents in useless pursuit.

After all that you’ll probably need a drink to calm your frayed nerves. One of the favorite drinks here at Madtini Intoxicology Labs is the Dark and Stormy. We’re re-naming it the Dark & Spooky for Halloween weekend and throwing in a spooky spider and serving it up with a extra shot of evil.

Preparation
Combine the dark rum and lime juice in a cocktail shaker. Stir, then pour over ice in a rocks glass. Top with Ginger Beer and garnish with a wedge of lime and a large black spider. 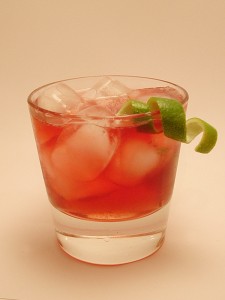 September 16, 2010 is a day of celebration for Mexico. Today they celebrate 200 years of Independence from Spanish rule and 100 years since the Revolution began in 1910 and ousted dictator Porfirio Diaz. Its a chance for Mexicans to celebrate all over the world. We’re not Mexican, but tonight the Madtini labs is hopping with the sounds of Mariachi, awkward dancing and of course ice-filled cocktail shakers. And I swear another couple of these El Diablos and we’ll be brave enough for a round of amateur bullfighting.

Combine tequila, creme de cassis in a cocktail shaker with 3 ice cubes. Shake vigorously and strain into a rocks glass full of ice. Add in lime juice and top with ginger beer. Garnish with a twist of lime.

In an odd coincidence, I picked up a bottle of Ginger Beer last week at the local grocery store. My intention was to make a ‘Dark & Stormy Night’ once I picked up some dark rum. I never managed to pick up that dark rum, so maybe its destiny that it was sitting in the bottom of my refrigerator when I was reading about the Moscow Mile and noticed that it included Ginger Beer.

As i started researching it became clear that this particular cocktail had a lot more history to it than I realized. The Moscow Mile actually was the cocktail that kicked off the vodka craze in the 1950s in the US when Gin was the preferred clear liquor. The cocktail was ‘invented’ in 1941 by John G. Martin of G.F, Heublein Brothers Ins; an East Coast distributor of food and spirits, and John ‘Jack’ Morgan, President of Cock’n Bull Products, which produced ginger beer. Morgan was also the owner of the Cock ‘n’ Bull Tavern, a Sunset Boulevard bar that was popular with celebrities. The two combined their efforts and came up with the Moscow Mule.

The Moscow Mule was even served in a copper mug as part of its marketing in American bars, a strategy that played a major role in shifting the liquor market from to gin to vodka.

Fill a rocks glass with ice. Pour in vodka, lime juice and a dash of bitters. Top with Ginger Beer and garnish with a lime wedge