You are here: Home / Archives for orange juice 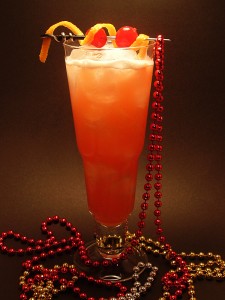 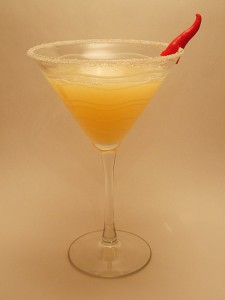 Tuesday we celebrated National Margarita Day with 6 Fiesta-Worthy Margaritas. To celebrate Friday we’ve decided to turn up the heat by adding some red chili peppers. You may want to have a glass of ice water standing by to put out the fire.

Cheers and here’s to the weekend!

Preparation
Wet the rim of a cocktail glass with a piece of lime, then turn the rim in a shallow plate of coarse salt. Garnish with a 2 inch piece of the chili. 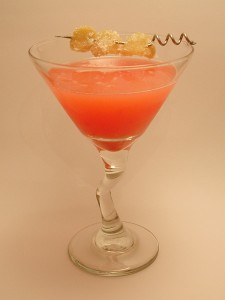 Ginger root is a versatile food that can be used for everything from a spice in cooking to helping to prevent motion sickness and nausea – so why not cocktails. The Candied Ginger Martini takes quite a bit of work, so make sure you have a few friends around to help you enjoy all the fruits of your labor.

Preparation
Candied Ginger: Create candied ginger slices by boiling a 3 cups of water in a shallow covered saucepan. Add 1/2 cup of thinly sliced ginger and 1 cup of sugar. Let stand for 15 minutes. Drain off liquid (save and use for ginger syrup), and place ginger slices in over at 200 degrees until slices are dry but still chewy. Let cool and cover the ginger slices in sugar and set aside.

Drink: Muddle a tablespoon of grated ginger, 4 raspberries and honey syrup in a cocktail shaker. Add vodka, juices and ice. Shake vigorously and strain into a chilled cocktail glass. Garnish with a few pieces of the candied ginger and serve.

This drink recipe was adapted from this post at Nibble.com. 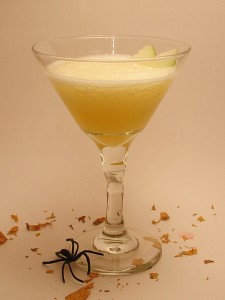 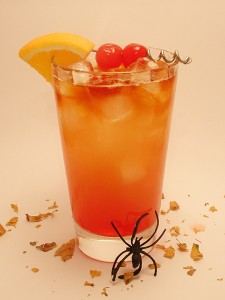 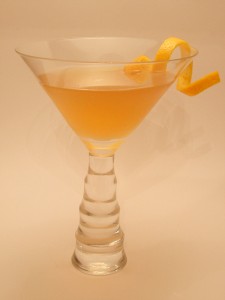 Combine all the ingredients in a cocktail shaker half-filled with ice. Shake the living barnacles out of it for a few seconds, strain and serve in a chilled cocktail glass. 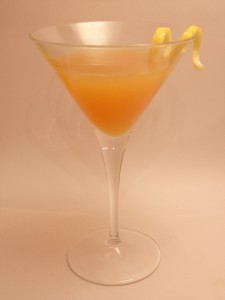 It’s Friday afternoon again and while scanning through the pages of the Complete Home Bartender’s Guide: 780 Recipes for the Perfect Drink we chose this drink recipe. Tonight’s Friday Madtini cocktail is the Hold Up, with its delicious mix of brandy, coconut rum, orange and lemon juice will make your taste buds jump up and salute the oncoming weekend.

Cheers and have a happy weekend!

Add the ingredients to a cocktail shaker with several ice cubes. Shake and then strain into a cocktail glass. Garnish with a lemon twist. 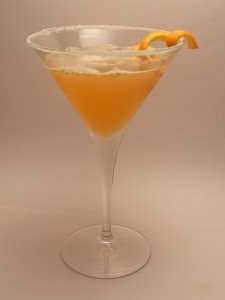 Just as we were starting to relax around here with our Mint Juleps, one of our intrepid Madtini interns found this drink recipe on the Interwebs. Seems the gang over at Cocktail Times had posted a delicious looking drink recipe dubbed the Gran Derby, and since it appeared we had just enough Grand Marnier left in inventory, we felt we could substitute that for the GranGala listed in the recipe.

Still two hours to post time for the Derby… cheers!

Moisten the rim of the martini glass with a lice of lemon. Dip the rim in a small plate covered in superfine sugar to create a frosted rim. Combine the bourbon, grand marnier, lemon and orange juice in a cocktail shaker filled with ice. Shake vigorously and strain into a cocktail glass. 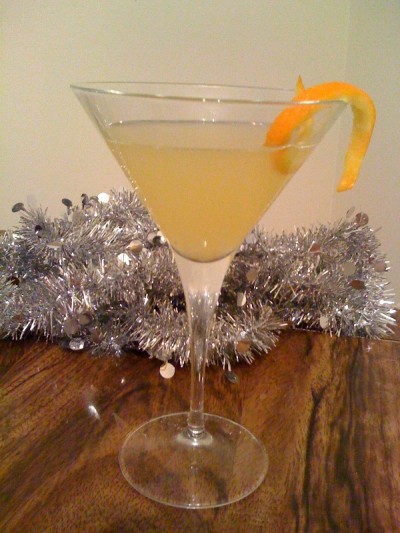 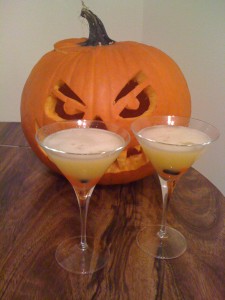 And who are you supposed to be? Those are the words that ended last week’s episode of Mad Men. So, who are you supposed to be, really… are you the Don Draper, debonair Madison Avenue ad guy or Dick Whitman, unwanted son of a prostitute and hillbilly escapee. Betty knows, the other Mrs Draper knows, Bertam Cooper knows something – and thank goodness the increasingly vindictive Roger Sterling doesn’t know (yet).

We’re only a few hours away from a new episode of Mad Men, the time change is here, Halloween is over. There’s nothing we can do about the time change, hopefully you were able to gain some sleep or maybe even party a little longer on your Saturday night.

The day after Halloween means one thing, candy is on special. So, let’s take advantage of that fact and add a little candy to this week’s cocktail. This recipe originally called for candy-corn. After an exhaustive search of local stores, candy corn was nowhere to be found, but jellybeans were.

For the rest of the cocktail:
1 3/4 ounces orange juice
1/4 triple sec
Juice of 1/2 a lemon
1 large egg white
Black and orange Jellybeans for garnish

1. To infuse the vodka: Combine the white jellybeans and vodka in an airtight container; set the container aside for at least 3 hours, then strain
2. Make the rest of the cocktail: Add 4 ounces of the jellybean-infused vodka, the orange juice, triple sec, lemon juice and egg white to a cocktail shaker filled with ice cubes
3. Shake vigorously for at least 30 seconds. Strain the mixture into 2 chilled martini glasses and garnish with the black and orange jellybeans

As always, cheers from Madtini World Headquarters. Hope you had a great Halloween and good luck in November.