You are here: Home / Archives for root beer 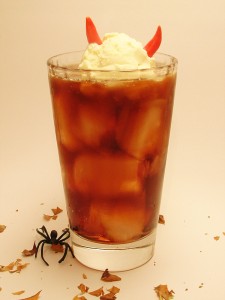 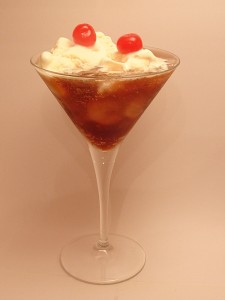 A few months ago we were perusing the shelves of the LCBO and spotted bottles of Three Olives Root Beer Vodka. Memories flooded back to the days of the local A&W drive-in, which served up giant  mugs of ice-cold root beer on those crazy window trays. After a few more trips down memory lane, we knew we had to add this to our Madtini Lab supply.

Last weekend we attended the Toronto Drinks Show. The lineup at the Three Olives booth showed that we were not the only ones curious about this product. The mixologist added some coke, whipped cream and a maraschino cherry to the root beer vodka producing a delicious drink. We took that idea and ran with it – adding two scoops of vanilla ice cream in place of the whipped cream and doubling up on the cherry. Madtini is proud to present the Double Cherry Root Beer Floatini.

Add crushed ice to a chilled martini glass. Add the Root Beer Vodka and Coke to the glass – top with two scoops of vanilla ice cream and maraschino cherries.