You are here: Home / Archives for vermouth 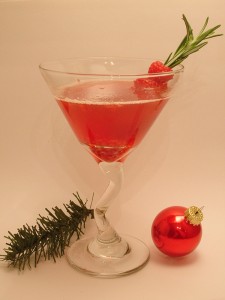 What do Andy Warhol and the Christmas holidays have in common? It turns out quite a bit actually. Andy illustrated and designed a gorgeous series of Christmas cards for Tiffany & Co. between 1956-62. In addition, Andy created a 33-minute film of Soren Agenoux’s play of Charles Dicken’s Christmas Carol in 1966.

Now that we have a solid connection made between Andy Warhol and the holidays, we can justifiably include the ‘Warhol Crush’ as one of our 12 Days of Madtini Cocktails. This drink was published in 2008 as part of Martini & Rossi’s ‘Factory Drinks’ campaign, revisiting the work that Andy Warhol did for the iconic Italian makers of vermouth  in the ’50s and ’60s. You can make a safe bet that we’ll be featuring the rest of these drinks on an upcoming Madtini post.

Preparation
Strip off a dozen rosemary needles and add them to the bottom a mixing glass with the raspberries and simple syrup. Muddle the items gently. Add ice, then add vermouth and cranberry juice. Shake the ingredients, then strain into a chilled martini glass. Garnish with three raspberries speared by a rosemary sprig.