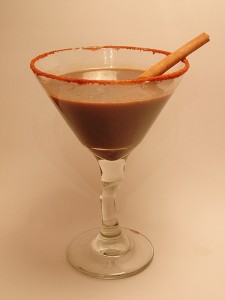 Having recently been to the Toronto Tequila Tasting Show, we were only too happy to include this great tasting hot cocktail in our 12 Days of Madtini Holiday Cocktails list. The recipe is adapted from the Food Network , where it appeared courtesy of Jill Davie, Chef de Cuisine at Los Angeles restaurant Josie.

Add cocoa powder, chili powder, cinnamon and cayenne pepper to a saucepan on low heat. Stir lightly for a few minutes until you can begin to smell the roasting spices in the air. Using a wooden spoon, slowly add the Baileys. Bring the mixture to a slow simmer. Next, stir in the agave nectar and then remove from the heat. Rim your mug or cocktail glass by dipping it into a saucer of agave nectar and then into a saucer of paprika. Add the tequila, then the hot cocoa and Baileys mixture. Stir with a cinnamon stick and then serve.