You are here: Home / About Madtini 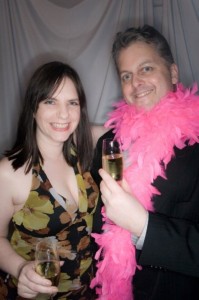 It was August 9, 2009 – a week before Season 3 of The AMC series Mad Men was to premiere and we were spending the weekend rewatching season 2 episodes of the series so that we’d be caught up and ready for the premiere on August 16, 2009.

Merlene was likely sipping a glass of wine and Randy was possibly sipping wine or maybe a gin & tonic.

We both loved the Mad Men series. The 1960s timeline. The gorgeous costumes and settings. The glamour of the Madison Avenue Advertising world.

We talked about how nicely people dressed. How different things were – the smoking, the drinking, the inequality between the sexes, the drinking.

Both of us being products of the 1960s, it was odd to think that our own parents would have dressed similarly and lived in those times. Not in the world of Madison Avenue advertising but Mad Men is about more than advertising. It’s a window into 1960s culture, fashion, ideals and political climate.

Randy Matheson: There should be a drinking game for Mad Men. Every time one Don Draper or Roger Sterling makes a drink…
Merlene Paynter: Ha ha! No kidding.
Randy: We should make a retro 60’s cocktail next week for the premiere. Take some photos. Post it on twitter.
Merlene: 60’s cocktails… Martini of course, Manhattan, Old Fashioned… I can make a Martini… a Mad Men Martini… ha ha ha (remember there was some wine drinking at the time) a Madtini!
Randy: Madtini! That’s perfect!
Merlene: (logging into a domain registration site) Madtini.com is available.
Randy: Really?
Merlene: Well now it’s not. I just bought it!

Over the next few minutes Randy had set up the @Madtini twitter account and the #Madtini hashtag and began working on a logo/header design. Merlene had set up the WordPress blog. Madtini.com was born!

We decided that we’d do a weekly cocktail and post it on Sunday before each episode of Mad Men. Neither of us were bartenders, mixologists or have any real knowledge of cocktails. Madtini was created very spur of the moment. A whim. A hobby. An extra little way to enjoy watching Mad Men together each week.

On August 16, 2009 – a few hours before the premiere of Season 3 of Mad Men, armed with a newly purchased cocktail shaker and martini glasses, we launched with 2 posts. Welcome to Madtini and The Original Martini.

Over the following weeks we made a cocktail each week before each episode. Some were good. Some not so good. Over time we became a little bit more thoughtful of garnishes, types of cocktails, and even photographing the cocktails. By the time the final episode of the season aired the cocktails weren’t about Mad Men and we had begun posting seasonal cocktails, holiday themed cocktails and event themed cocktails. Some were good. Some not so good.

With just over two years, over 250 cocktails posts to Madtini.com (and many others that didn’t get posted) we’re still not bartenders, mixologists or know much about making cocktails, but we’ve learned a lot along the way, met a lot of great people, and had a lot of fun. We are still learning, making cocktails and having fun.

If you follow @Madtini on twitter or “like” the Madtini page on Facebook you’ll get regular updates in your social networks. Of course you can bookmark Madtini.com or add it to your RSS reader.

Randy, Merlene and Madtini are located in the Toronto, Canada area. If you would like to invite the Madtini folks to an event or have us review your product, book, or establishment you can send us a message using the Madtini Contact form.


Thirsty? Search for a drink: