You are here: Home / Rum based / Drink like a Pirate Day: ‘Ol Spiced Sailor 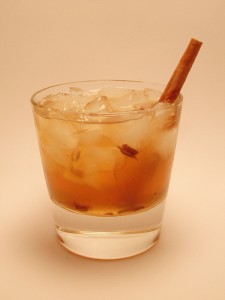 Preparation
Place 8 ice cubes into a dish towel, add a cinnamon stick, pound the ice with a rolling pin until its well broken up. Pour the ice and broken cinnamon into a rocks glass. Mix the fresh lemon juice and brown sugar with the hot water, add rum and cinnamon schnapps. Stir and garnish with a cinnamon stick, and serve to your First Mate.