You are here: Home / Archives for vampire

New Moon, the second installment of the Twilight movie series, hit the theatres this weekend and ousted The Dark Knight for single day domestic box office record with $72.7 million – the Friday haul for the Twilight sequel includes a record $26.3 million from midnight screenings alone!

Apparently vampires and werewolfs in love with teenage girls is big box office these days.

Here at Madtini World Headquarters we’re fans of the HBO tv series True Blood and we willingly admit to watching Buffy the Vampire Slayer a time or two and reading some Anne Rice and even some Laurell K. Hamilton novels.

But the thing with the Buffy series and the True Blood series as well as the Rice & Hamilton novels is that the “human” love interest of the vampires is  never just merely human. Buffy was the Slayer. Sookie Stackhouse can hear thoughts and communicate telepathically (and I’m guessing there’s more of Sookie’s powers to discover).

In the Rice novels most of the novels were just about the vampires but even when Mona Mayfair (a powerful “witch”) fell in love with newly made vampire Quinn Blackwood it wasn’t long until she became a vampire too.

In the Twilight series, teenage Bella is the love interest of 100+ year old Edward and new werewolf Jacob. While I can understand what Bella and Jacob have in common, being approximately the same age, I cannot even fathom what a vampire, who has been 17 for 100 years, would have in common with a girl like Bella.

So – as a matter of practicality, I’m placing #teamMadtini firmly in the #teamJacob camp. And in celebration of the first weekend box office success of New Moon (which we have not seen) we give you the New Moon Cocktail. Gin, Triple Sec, lime and tonic – it’ll make you howl at the moon…

Combine all ingredients and stir. Serve over ice in an old fashioned glass. Garnish with wedge of lime. 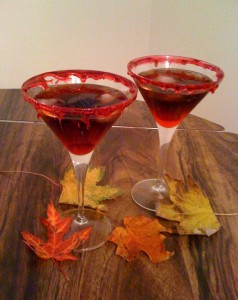 It’s Week 11 of the Madtini Virtual Cocktail Party, and… its less than a week til Halloween. Besides being dedicated to our favorite show Mad Men, we’re also big fans of HBO’s True Blood. Well, we looked all over for a case of TruBlood, but I guess it hasn’t made it up to Canada yet. But we couldn’t leave the vampire theme completely alone, so this week our drink of choice is Dracula’s Kiss, and it is indeed a delicious bloody treat. For extra fun we created a corn syrup blood to make the glasses look extra creepy.

I could have used one of these yesterday while attending the Toronto ZombieWalk Hundreds of zombies, young and old, found their way to Trinity-Bellwoods park just off of Dundas Street West. There were zombies from all walks of life, kings, messiahs, celebrities… I grabbed quite a few pictures and posted them online last night. Click here to enjoy the photos while I sit back with a cocktail – and avoid cleaning up the sugary bloody mess in my kitchen.

Combine the sugar, corn syrup and water and cook (without stirring) to 300F (I guessed and it worked out pretty good)
Add the red food colouring.

Turn down the heat and wait a few minutes – the mixture still needs to remain hot – take the glass and dip the top of it into the red moisture. Pull the glass out and carefully turn it back rightside up. Be careful of the hot dripping mixture falling onto your hands.

Watch as it drips down the outside of the glass looking like real blood.

1. Coat the bottom of a highball glass (i used a martini glass, it looked cooler) with grenadine.
2. Add the ice and black cherry vodka
3. Fill the rest with coke
4. Garnish with the cherries